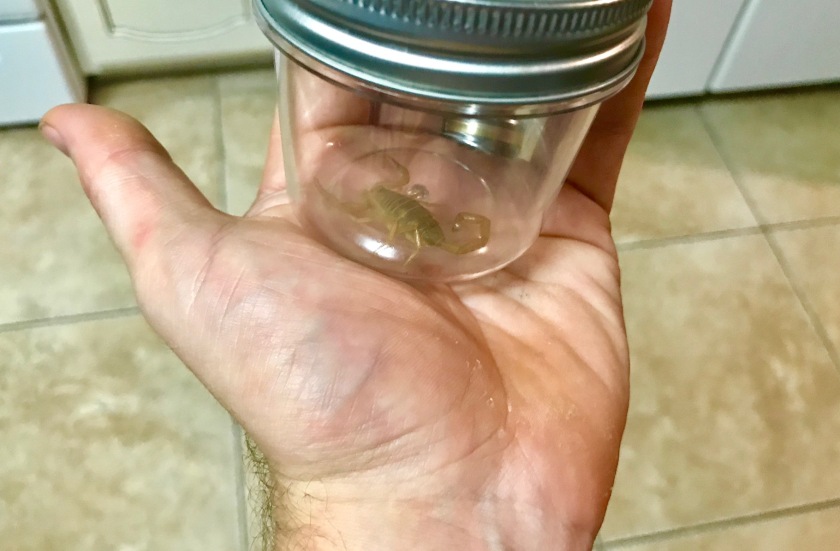 If you follow my posts on social media, you probably saw at least one or two pictures of my recent encounters with some scorpions. If you’re a long time resident or native of the desert, you might be rolling your eyes at this quirky hillbilly who keeps behaving like a tourist. Maybe you’re wondering why I have this new silly fascination in the first place.

First off, poke fun all you like. I don’t cut slack to all the flatlanders who check every tree for bears and who are enamored with snow either, so I’m good with being the foreigner who sometimes mistakenly calls a single cactus a cacti and takes pictures of common pests.

Second, there is a specific reason for my scorpion fascination and I think it makes a great blog topic. When I first told others I was moving to the valley, many of them brought up one of two things: heat or scorpions. For whatever reason, my announcement incited their almost automatic warning about these two things. I heard these cautions so much that I actually began to feel a bit of angst and I was even inclined to read about desert survival. Of course, heat and scorpions exist everywhere I have lived, but I still developed some trepidation.

There are a few primary ways we can approach fear or things unknown. We can freeze and let them have their way with us, we can run away and hide, or we can confront them head-on with boldness. As a person who lived with debilitating anxiety for many years, I am committed to the latter. In short, I have gone on my little scorpion hunting expeditions specifically because they made me uneasy. I purposely exposed myself to these creatures, not just to desensitize myself, but also so that I could learn about them.

I do this sort of thing frequently, actually. For example, scuba diving when I felt queasy around open water, skydiving when I was uncomfortable with heights, spelunking to move past a fear of enclosed spaces, and actually doing that GORUCK even though I might have failed in front of men whom I respected. You’ll notice this last one isn’t a specific phobia, but actually a fear of vulnerability, which is probably my biggest fear of all.

Believe it or not, social interaction used to be very troubling to me. Not only was I absolutely terrified of public speaking, even a simple one on one conversation would cause my heart to pound and my stomach to turn. At the most difficult point of my teens, my doctor prescribed several medications to help quiet my overwhelmed mind. As an adult, I still confront this old beast, but I have since become familiar with him and I am no longer afraid. Just to be sure, I choose a path surrounded by others full of public speaking to help bolster my courage.

Real talk, those are the easy ones…

Other major points in my life when I have intentionally faced off with myself include reading parts of the Qur’an and going to a mosque when I realized I feared Muslims and attending an all-black church when some friends brought some blindspots to my attention.

My point is that when we shine light into darkness, it loses its power over us. If you are angered by a republican, might I suggest taking him to lunch. If you are disgusted by your gay neighbor, maybe its time for a pride parade. If you’re a vegan, ask a hunter about his hunting trip. Go ahead and attend a fiesta, or a Hanukkah celebration, or spend some time with children, or older adults. Whatever your growing edge is, go there and confront the darkness!

My mission is to courageously live an authentic life that influences other individuals to be their best selves. View all posts by tomarbaugh