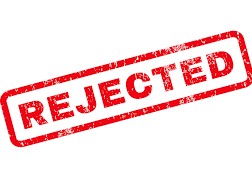 The way I have often told the story is that upon completion of my social work degree, the economy promptly collapsed and there was limited work in my field. This, I say, is what led me to taking the delivery job for the next several years. This version of the story isn’t exactly a lie, but it isn’t quite the full truth either. The economy did indeed collapse and jobs in the human services were scarce.

But, what I have often left off is that I was dismissed from the social work job I already had. I had also intended to go on to graduate school and pursue licensure. In fact, I applied to several graduate schools on multiple occasions and was denied over and over.

If there were social work jobs in my city, I certainly wasn’t applying for them because I felt like an utter failure and couldn’t stand the thought being rejected by anything or anyone else. I spent the next few years sulking and playing it safe.

There was nothing innately wrong with the delivery job; I was grateful and humbled to have it. It just wasn’t my calling. And I knew it. Yet, I simply did not have the courage to step out.

I felt called into ministry long before I pursued it vocationally. For months I felt the tension, knowing that I was being a coward. Until one day my boss called me into his office. The economy had really bottomed out and times were tough. He decided to let someone go and somehow he knew it was supposed to be me.

This time I felt absolute relief; someone else had made the tough decision for me. Out of work and with nothing to lose, I applied to seminary. I was accepted, but I was in over my head. It was hard. Really hard. And I worked my butt off. I had to grow and stretch in many ways because I was accustomed to playing it safe. I had tremendous self doubt, but I knew I was where I was supposed to be. I also had people who believed in me and affirmed me even though I didn’t quite believe in myself. In the end, this high school dropout finished.

I went on to complete a second masters, get ordained, obtain board certification, and land a job as a senior chaplain. My community continued to affirm and love me with unconditional love. They gave me incredible opportunities to grow and they trusted me to be great.

Eventually, I started to trust them too. I stepped into my calling. I took a chance on myself and owned it. I fail. I fail a lot, but I also succeed. I’m a great chaplain. And a great husband and father, even when I blow it.

Someone reading this is playing it safe. You are taking something good in place of something great because you are afraid. I don’t know if it’s because someone once told you that you’re not good enough or that you’re too much, but I want you to know that you can jump. You don’t have to wait for someone else to make the decision for you. You won’t make every shot you take, but one thing is certain: you’ll miss every one that you don’t. Go get some.

My mission is to courageously live an authentic life that influences other individuals to be their best selves. View all posts by tomarbaugh